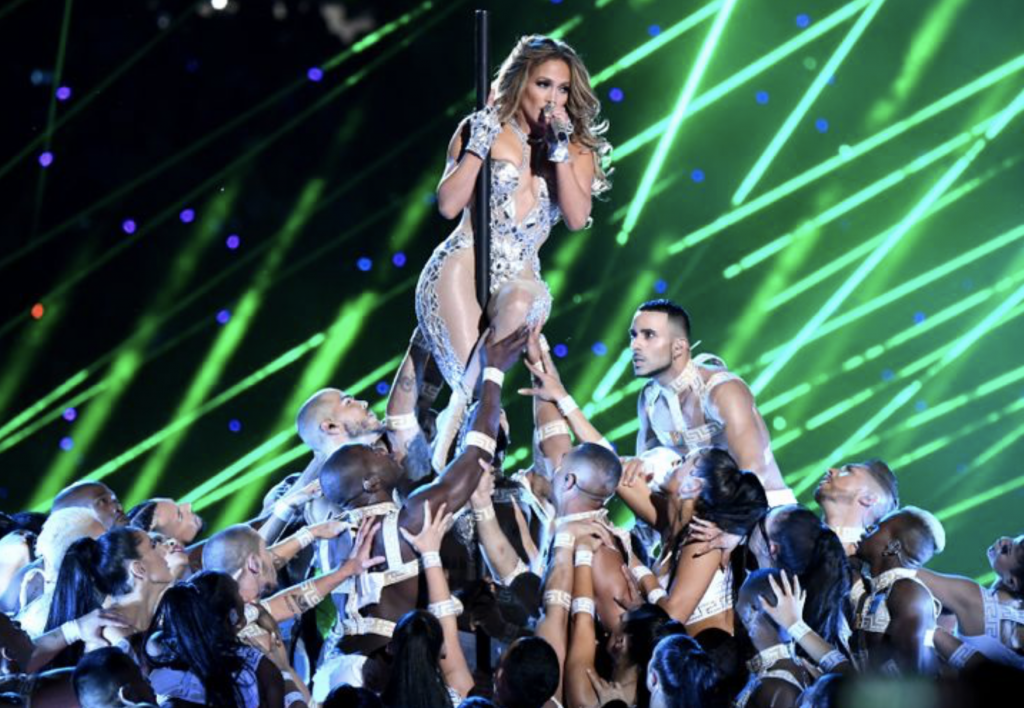 In case you missed it: Actor, singer and celebrity Jennifer Lopez briefly performed a beginner’s pole dance during Sunday’s Super Bowl halftime show, when she ascended fairly gracefully upon a slowly spinning pole, and then held two poses while lip-syncing.

While many viewers and members of the media were impressed by the 50-year old entertainer, many actual pole dancing strippers like me were cringing as we reflected on what a tough couple of years it’s been for folks in our industry.

The halftime pole performance referenced the 2019 movie ”Hustlers,” in which Lopez played a fictionalized character loosely based on a former stripper. JLo’s brief pole performance came just days after Dua Lipa was criticized as “exploitative” and “unfeminist” for tipping real working strippers at a Grammys afterparty, although I’ll argue that tipping a highly stigmatized working woman is the most feminist thing you can do.

When I saw JLo slowly climb a stripper pole, I felt annoyed, frustrated and angry. Here we go again, I thought, another celebrity using the “shock value” of sex work to boost her career and the media once again using stripper imagery for ad revenue. I got texts from a few stripper friends who felt similarly.

The choice to showcase adult entertainment in the form of Lopez’s halftime pole dancing comes at a time when actual sex workers and adult entertainers are being harmed, silenced and stigmatized by bad legislation.

The pole dancing you see at fitness studios is mimicking stripper art, and nothing else, despite their attempts to distance themselves with hashtags like #notastripper. (I started #yesastripper in 2015 to combat that erasure and to create an online community for us.)

Dancing women have always been discriminated against. But in a capitalist society, women like myself have been able to survive and thrive by working in sexually oriented trades that can be lucrative, as well as dangerous due to criminalization and stigma.

Cashiers sometimes scoff or snicker, “Do you work in a bar?” when I pay for groceries or coffee with $1 bills. I’ve been accused by strangers on the internet of child abuse for pole dancing in my home near my child. I had to interview multiple tax accountants before finding someone trustworthy to help me file. I brace for a lecture about sexually transmitted infections whenever I go for a screening, even at more purportedly progressive clinics. Mentioning my job in a parenting group means I might be asked to leave if others aren’t “comfortable” with my work. I’m often told by strangers on the internet that I’m a victim and just don’t realize it.

Female strippers are routinely challenged over or denied child custody due to the sexual nature of their labor. Strippers experience discrimination in finding housing, filing tax returns and filling out job applications if we are so bold as to list that previous work experience. Dating apps like Tinder and Bumble kick us off if we list our labor in a bio or even chatting with a prospective match. Sex workers on television are typically mocked or murdered if they appear as characters at all.

And then in April 2018, President Donald Trump signed into law two bills, usually referred to as FOSTA-SESTA, that supposedly aimed to prevent sex trafficking by holding websites liable for user content. The Justice Department and sex worker advocacy groups warned that the new laws would actually increase trafficking and abuse. Immediately, legal and consensual adult sex workers like myself were kicked off various internet platforms, due to the poorly written legislation.

I made 30% less income in the year after, mostly because it became impossible to post my club schedule online, share my podcast on safer sexuality, or link to my webcam shows on social media. Some providers were hit harder, and many escorts who were suddenly unable to advertise online took to the bars and streets to try to find clients.

Making sex workers invisible on the internet made it harder for us to communicate with each other, earn income and screen our clients. It made sex workers and their families poorer, less safe and more stigmatized. Sex work became more dangerous and misunderstood again.

Representation matters, so I asked other pole dancing strippers, specifically dancers of color, how they felt about JLo’s mimicry at a time when their work and safety are being threatened by internet censorship. These are some of their responses:

I didn’t enjoy it, we work so hard for our own families to accept us.

I want to know if JLO is a swerf [sex worker-exclusionary radical feminist] of any sort or if she supports sex worker rights, before I see her pole dancing in the super bowl halftime show.

JLO, get outta our community if you’re not willing to help us or speak on our issues.

She looked beautiful, but she could have hired real POC strippers, but that’s considered “too much.” Bye JLo.

“It’s refreshing to see dancing part of mainstream media ― however it comes off as exploitation when it’s only referred to for marketing. Real life dancers are dealing with consequences of lacking basic rights, and a voice, due to FOSTA/SESTA,” said Crissa, a 10-year stripper of Mexican and Puerto Rican ethnicity. “There is a responsibility that comes with exposing people to the industry ― otherwise you’re just putting women in danger, particularly women of color who aren’t as protected as other demographics.” Crissa is the creator of The Dancer’s Resource, a downloadable app for strippers to share information about working conditions in clubs.

She’s bringing visibility to strippers! some might argue about Lopez’s performance. But we don’t need “visibility” ― everyone knows strippers exist.

If you want to bring visibility to the way strippers are mistreated, however, let’s talk about the predatory licensing fees and tip-outs that most clubs collect from their dancers.

Let’s talk about the faux-minist women who secretly filmed strippers without their consent in Sheffield, England, in order to try to close down the clubs, while claiming they were protecting the workers.

Let’s talk about the fact that most strippers pay the club owners more money in fees to work than any customer pays to enter the venue.

Let’s talk about Dynamex and Deja Vu clubs in California forcing their dancers into employee status and then appropriating their tips.

Let’s talk about the fact that it’s simpler to purchase an AR-15 in Tennessee than to be approved to pole dance, which requires a fingerprinting, a background check, a fee and a two-week waiting period.

Let’s talk about Ohio police departments doing club stings, supposedly to “fight trafficking.” It is common for a club to be raided during business hours, all dancers lined up and photographed by police, fingerprinted, interrogated and documented. “They once held us for four hours,” one woman told me in an email.

I do not see JLo or even former stripper Cardi B bringing these issues to the public.

“JLO is an opportunist appropriating a marginalized group of women, whom she does not advocate for. Meanwhile their rights are being taken away and more with the passing of every conservative bill, disguised as stopping sex trafficking,” said one biracial Latinx stripper for seven years whom I’m calling Aaliya.

It is not progress to see a celebrity briefly doing a pole dance on television when real middle-aged strippers struggling to make ends meet in the post-FOSTA-SESTA era is a much more common reality. (Yes, there are women hustling at that age, and some with better pole work.)

“She took stripper culture for her personal gain, to look cool by doing one pole trick, and she has not contributed to strippers in any way,” said stripper and social media creator @womenswhork on Instagram.

If you want to support us, buy our art, read our writing, consume media created by us (if you can find it) and tip us in the club, because we are working.

FOSTA-SESTA continues to endanger people, mostly women, queer and trans youth and racial minorities doing survival sex work. If you care about these things, push your congressional lawmakers to call for a National Institutes of Health study on the impacts of these bad bills, so that they can be repealed. Additionally, support this lawsuit challenging FOSTA.

I appreciate what stripping has done for me and I believe in the value of safer adult entertainment and consensual contact work. With education and destigmatization, I believe we will someday value our sacred whore entertainers. In the meantime, I disagree that a celebrity actor using a pole as a prop is paving the way for any of us.