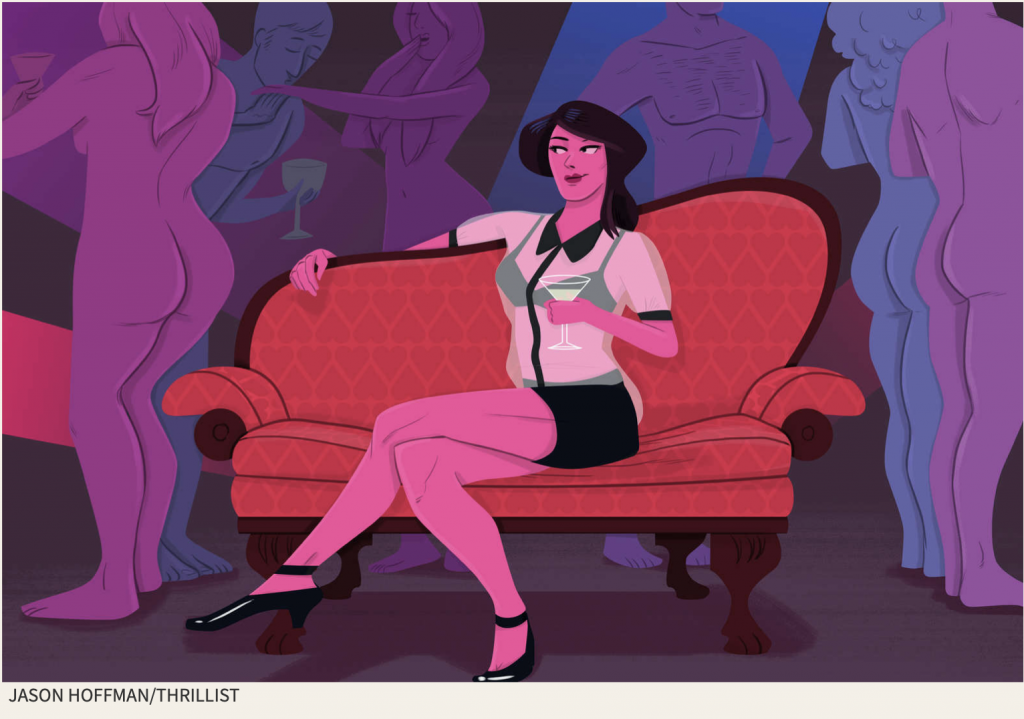 I’m a Stripper, but I Just Visited a Sex Club for the First Time

It was my first time in a sex club. And for all my experience with nightlife and sex as a professional stripper, I had little experience with a combination of the two. I admit: I was nervous. Would I be safe from creepy dudes? Would there be horrifying stains on the walls? Worse: would the drinks be weak?

Club Privata is a newly renovated, reopened venue in Portland that once housed a similar spot where Ron Jeremy was a sponsor. In early 2016, the former management dispersed; and the business is now run by a longtime married couple and managed by a woman named Holly Redeau.

I parked Downtown, and walked hurriedly to the main entrance. Along the way, I ran into my friends Jillian and Eleanor: Jillian is the head of WISER, a women’s group comprised of sex educators and workers; while Eleanor leads nude theater group Dance Naked Productions. I was in good company, as these two are mavens of the swinger scene and were eager to show me around.

“There was a cage, thumping music, and the unmistakable smell of… quiche?”

Rule 1 of sex clubs: no cellphones

“Have you been here before?” asked the suited doorman. I had not, so he presented a dozen pages of digital info to peruse. I signed electronically. “No cellphones at any time” was a rule to which I was not accustomed, and I thought it would be the most personally challenging part of the evening.

I presented my state ID, paid the $10 fee (the low charge only applies to women), and pushed through the heavy doors to the ground-level bar and dance room. There was a cage, thumping music, and the unmistakable smell of… quiche?

“‘I guess somebody was giving a blow job in the cage,’ remarked Eleanor, and I was sorry I’d missed it.”

Adults of a few generations mingled and danced. A woman in a sailor’s costume ran by, and jumped into the cage. A buffet of finger foods and entrees rested in catering dishes along the far wall. Two bartenders kept busy and coolly mixed, shook, and poured.

“Let’s put our stuff away!” Jillian shouted. The ladies showed me to the locker room, which allows attendees to tuck away their coats, purses, and heavier items. I removed my knee-length coat, feeling overdressed in my up-the-butt shorts and loose blouse. Some breasts bounced past me, and nobody gawked.

“I guess somebody was giving a blow job in the cage,” remarked Eleanor, and I was sorry I’d missed it. “There’s three floors,” she said. “I’ll show you around.” The security staff was male, tall, and clearly marked. Some nodded in acknowledgement as we squeezed up the carpeted stairwell to the private rooms on the next floor. “There’s no sex allowed on the stairs,” Jillian said. “That’s a fire hazard.”

Surprisingly, most people arrived as couples

Most of the attendees were between the ages of 35 and 55, and I scanned for people who looked interesting. There were a lot of couples. Not many people were having sex yet, but it was still early.

There were some single men, single women, a few women I identified as escorts, and some trophy wives. The trophy wives and escorts looked similar in that they were all beautiful women with amazing postures and outfits.

Any respectable sex club has public and private spaces

Once we reached the second floor, the dance room faded away and we were met with around a dozen small private rooms — each outfitted with a bed covered in white sheets, with two condoms on top like chocolates in a fancy hotel. Rooms had different options for privacy: closed doors meant no one could come in. Open doors meant people could stand there and watch — and offer to join in — but those already in the room could decline. If the door was closed and the curtains open, people were welcome to watch from the other side.

“A muscular, large-breasted woman bound him, kinbaku-style, with rope.”

A stripper pole stood adjacent to a balcony overlooking the dance floor, and a 40-something woman was engaged in an adagio dance for her well-dressed lover, who sat on a couch. His hands were on his knees, and she lithely turned to crawl to his crotch and gently set her head in his groin.

Behind me, another intimate scene unfolded; a bespectacled man knelt on a king-sized sofa, nude except for his brief-like underwear. A muscular, large-breasted woman bound him, kinbaku-style, with rope. His eyelids fluttered, and he breathed slowly. Feeling shy, I headed to the bar.

The mingling, however? Kind of strange.

“Hello, what’s your name?” The handsome 7ft man sitting beside me introduced himself as a pilot from Atlanta. He asked Jillian and me if we’d like drinks, which we accepted from a large female bartender whose breasts jiggled as she poured. I swallowed the tequila and made small talk, although it was very apparent this pilot and I had zero chemistry. “Well, I’ll be around for a while,” I said, offering him an out. “Maybe see you around?” Two minutes later, he was dancing with another blonde woman. I found myself turned on, hoping to see them round some bases.

I saw Jillian out on the dance floor near the pilot; and Eleanor was chatting with a couple at the bar. My back pocket began to buzz with a message from my soon-to-arrive boyfriend, so I dipped into the bathroom away from the music, red lights, and no-phone policy. I tapped a response into my cellphone and admired the mouthwash that was available in a small metal pump by the sink.

The bathroom door swung open and a smiling, younger woman came in to wash her hands. “Hey… do I know you from somewhere?” It turned out our kids had played together the morning prior at a local mall. Small world! We shook hands and I told her I was a first-timer.

She smiled and primped her hair and clothed breasts in the mirror. “My fiancé had suggested we come here last year,” she said. “I was really nervous, but now I love it here. I feel so accepted.” She rested the palms of her hands on her hips. “I’m a curvy woman, but when I come here, I feel like nobody is judging anyone. It’s wonderful.” We left the bathroom and parted ways. I watched her step into the room with the exam table, where her fiancé was waiting.

All the best stuff happens in private rooms

I went upstairs to the third level. The action was clearly happening in the couples-only rooms, and I saw penises, finally. Thrust, thrust, thrust. One, two, three couples were entwined in different activities.

Two men took turns with two gorgeous women on the same bed, and the ladies moved to switch partners and condoms. A perfectly manicured set of fingers slowly reached between legs to gather and squeeze the mattress beneath them.

Then I saw my date, who’d clearly just arrived and was still taking it all in. The tattoos on his neck were familiar, and I instantly felt warm imagining the scent of his skin. I approached him and offered him a drink. We headed to the bar to swallow more tequila from the bosomy barkeep.

“Let me show you the private rooms,” I said, and took his hand. Moans of men and women were audible above the DJ’s music mix as we neared the second floor. The shibari couple was gone from the center stage; and the pole-dancing woman was blowing her partner on the black couch. I felt safe, if still a little nervous. I found a room and we stepped inside.

I watched as he took his time unlacing his boots. We lay on the bed and began kissing. It was private, but I knew that sex was all around us. I asked to open the curtain; and with his blessing I stood, pushed the semi-sheer gauze aside, and saw a familiar woman standing right outside: one of my co-workers from the strip club.

We made eye contact and I heard her say to the man she was with, “Hey! I know that girl…” Thinking better of trying for a three-way, I climbed back in the bed with my boyfriend. “Thanks for doing this with me, babe,” I said. He held me. 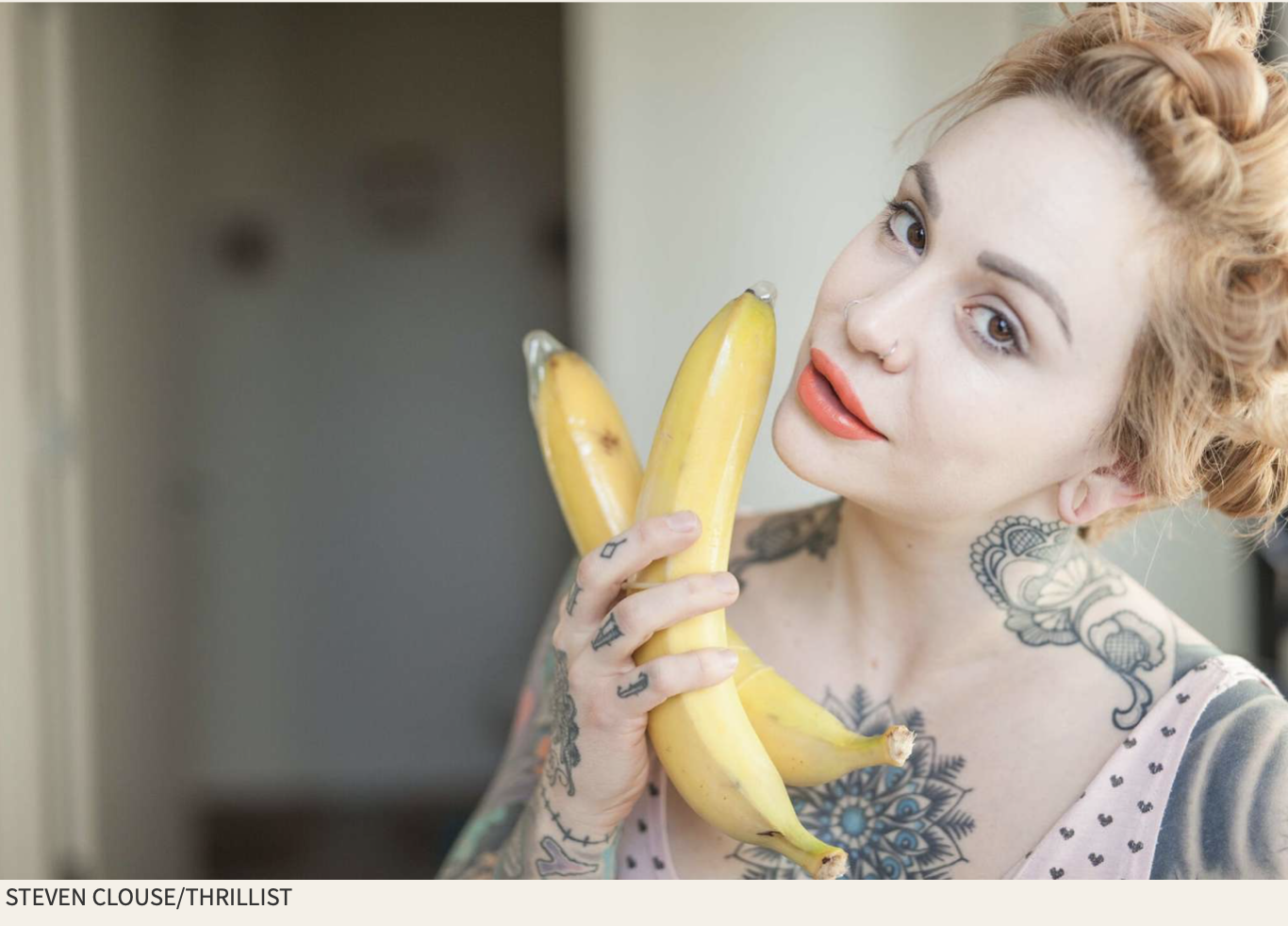 Your Sex Questions on Double Penetration and More, Answered
Next
It’s Time to Put an End to Small Penis Jokes