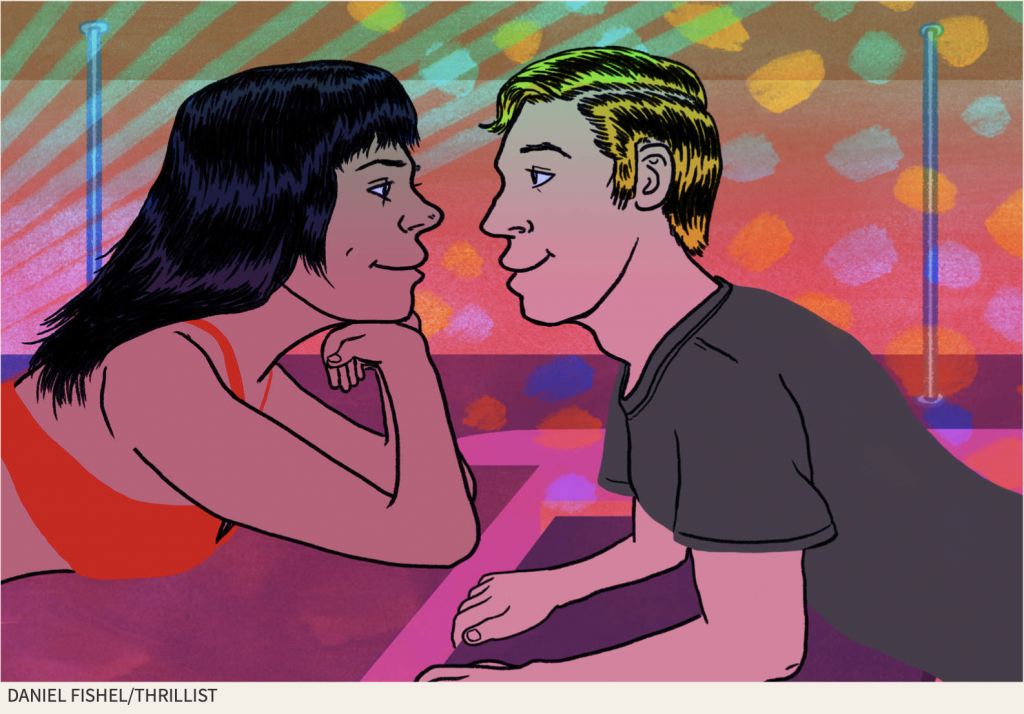 What Happens When Strippers Fall in Love With Clients?

“How did you two meet?” It’s a common question, and some couples have more interesting answers than others.

For me, I met the father of our child for the first time in July of 2009, a few weeks after I had started stripping. As a new stripper, it was overwhelming enough trying to dance nude. But as I gradually became comfortable with my new gig, I also got to know the quiet man who laughed at my jokes and loved pulled pork sandwiches.

He asked for my number after he had spent weeks getting to know me and gauging a mutual interest. I initially declined — “Let’s not ruin a good thing,” I told him, and he politely accepted. I wrestled with my decision, and ultimately asked for his number the next time I saw him. Seven years later we are amicably divorced, with one offspring to show for it. My story is not unique, as there are innumerable roads that lovers can take, but here are some common scenarios.

This happens the vast majority of the time. It’s basically in my job description to be charming and conversational, and some people get confused and can’t measure or discern real interest and attraction. I get asked out a lot; but statistically speaking, only accept about .05% of dates from dudes I meet in the club. Some female strippers pull from the patron dating pool more often, and other women let any handsome face become a distraction. Girl, keep your eyes on the hustle, as we say.

I know a handful of strippers who quit the job at their partner’s behest, EVEN THOUGH they had first met at her place of work. While it’s not unusual for boyfriends and girlfriends to ask their stripper girlfriend to leave the job behind after they couple up, it’s absolutely inappropriate for anyone to ask you to desert your method of income unless they are willing to pick up the slack.

“Being self-supporting is a key ingredient when it comes to mature relationships,” says sexuality counselor Buster Ross. And I would like to remind all readers that it’s a slippery slope to allow jealousy to dictate a relationship.

There are plenty of peeler-partners who do a fantastic job of staying out of the way of their SO’s hustle-and-grind. This includes an ability to listen to outlandish work stories, a willingness to pick up food at 3am, counting singles, and knowing your lady is coming home to YOU after a long night of listening to pick-up lines from clients. I love playing the game where my dude visits me, blends in like the other clients, and then meets me at home after shift. Well hello, young man.

It makes sense that people in the same industry would connect, yes? Households with dual nightlife jobs are not uncommon, as cities with venues that house male and female strippers will inevitably end up dating each other. Bonus aspects: they can go spray tanning together, and share stage moves and dancing tips.

“We motivate each other and go to the gym at 4am after work,” says Nicole, a stripper who met her fiance when she visited his place of work — a male strip club in Portland, Oregon, called Stag. “It’s a nice way to unwind,” she says, “and our glutes look amazing.”

Boy meets stripper, because he works in the same strip club

I’ve met some hot bouncers in my time. Who hasn’t? It is incredibly rare for couples to share a working space in the club, and lots of industry managers and bookers know better than to schedule couples together. If there’s a quarrel, nobody else on shift wants to hear about it.

I’d personally prefer to work away from my partner in order to maintain a healthy amount of independence and solitude away from the person with whom I cohabitate. “My wife dances across town,” says Mark, a Portland-area security guard. “It’s great because the kids are grown, and we share the same hours so we can spend time at home in the day.”

“I had to quit my job when our relationship of seven years ended,” says Jen, a 35-year-old former dancer. “We had so many mutual friends that I couldn’t stand to be around any of them. Never again.” Don’t shit where you eat, as they say.

If a person has a problem with my job, I don’t date them. If I have a problem with a person’s job, they shouldn’t date me. Not into long distance? Don’t date a dude who travels constantly. Can’t stand dogs? Perhaps don’t hang out with that vet tech.

Don’t like it if I shave my legs for other men? Don’t date a stripper.

There’s a lot of excitement around the idea of dating a stripper, but guess what? We’re people just like everyone else. Sweatpants, farting, sleeping in, cleaning the kitchen, meeting the in-laws… these  are all things that you can experience when dating a stripper — or anyone else.

“Relational harmony is the result of people doing what it is that they love,” says Ross, “and not forgoing what they love to uplift the dreams of others.” If you love what you do, don’t change for anyone. People come and go, but resumes and auditions are hard to come by. Porn-Star Sex Moves That Can Still Work in the Average Bedroom
Next
Your Sex Questions on Double Penetration and More, Answered