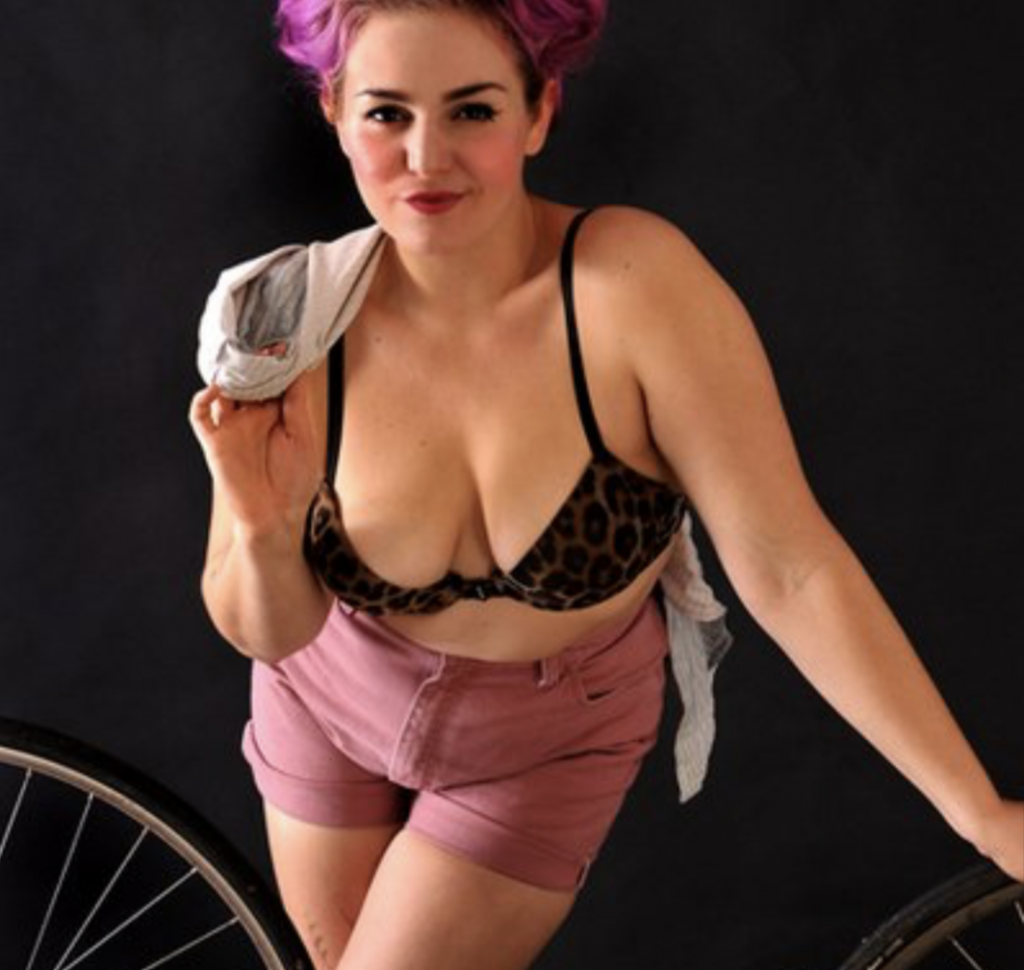 So I was a bit familiar with bike smut when I drove to sit down with the vivacious woman at a small coffee shop in SE Portland. Upon entering, we recognized each other immediately.

Can you explain Bike Smut?

Bike Smut is an international touring film festival celebrating human powered transportation and sex positive culture. Each year, we present a new program of short films about bikes and sex made by cyclists, queers and perverts from all over the world. I would consider myself a “bike-sexual.” I’m mostly straight, however one of the things I consider before I’ll date anybody is: do you ride a bike?

Pedalpalooza is 3 weeks of (nearly all) free bike events that happen every year in June in Portland. They are not organized by any one or group of people, but instead are totally open source. Anyone can organize an event and it will be put on the official calendar. The world naked bike ride is the biggest event that happens as part of it each year. My bicycle is a huge part of my life. When I go out or go to work, I ride my bicycle. I know how long it will take me, and I know how I’m going to get there. And if I had to guess, I bet 90% of bike commuters would agree with how I feel.

And how does that relate to your work?

In this car-centric, patriarchal society, it can be considered one of the biggest oppositions to that, to ride a bike. I consider it an act of freedom, to refuse to drive a car. All different types of people are bicyclists, so there’s a great deal of diversity but we have that major thing in common.

So how did you begin as a sex worker?

Lusty Lady was my first proper sex work gig, where I was a naked lady on the regular. That was over about 7-8 months in 2009-2010. I have been performing “burlesque” (but I kinda hate that term) since 2005 which moved into some more obscure and subversive feminist performance art which I did in the UK and around Europe when I lived there. I have also done other types of sex work intermittently throughout my adult life. I moved from SF to Portland, for an entirely different job and sadly, did not have time to dance, too. Then I ran off with bike porn and performed on stage and made my first couple movies. The first, I acted in and directed. This toured with Bike Smut 5 and was also featured in HUMP! and is now touring with Cinekink. The second film I just directed and toured with Bike Smut 5. My third film, which stars me and Rev, I co-directed with Courtney Trouble and will premiere with Bike Smut 6 and also launch on her website nofauxxx.com. Also, fans of Madison Young can find Fixed Gears and Fast Girls on Girlfriend films, which we will feature a scene from Bike Smut this year. Femina Potens gallery in SF sponsored one of our screenings in January.

You said that you first saw Bike Smut 4, and realized that such a genre existed. Rev. Phil helped create that, and now two years later he’s your associate?

When I saw Bike Smut 4, I really wanted to be a part of such an amazing project. I particularly wanted to help bring it to Europe. I had lived in London for 7 years and had lot of connections with cyclists and perverts and sex workers there. I delved deeper, looking for contacts elsewhere and within the year we were off to Berlin to start a 7 month tour.

Obviously, this is all self-funded, and I can’t assume that you guys are getting rich off of your hard work.

Oh no, not at all. We do this not for money, but for the love of our project and for our belief in it. Annie Sprinkle has said before that if you don’t like the pornography that you see, you should make your own. And that’s exactly what we are doing. Last year we went across Europe between April and November, and we visited 21 countries and 63 cities, showing our films. They loved us in Italy, people went nuts, and we were in television news. We really want to inspire people to actively pursue feeling good, and we think riding bikes and having sex are great ways to do that.

You meet so many people, what kind of feedback do you receive?

What do you think is next for you?

We hug goodbye, and she unlocks her beloved Mademoiselle Margo from the rack. I walk to my parked car, and I’m still pulling my seat belt across my chest when I see her glance sideways and pedal smoothly across the street, turning left in to the neighborhood. Her black dress billowing in the breeze, she disappears over a hill, coasting into the sunshine.