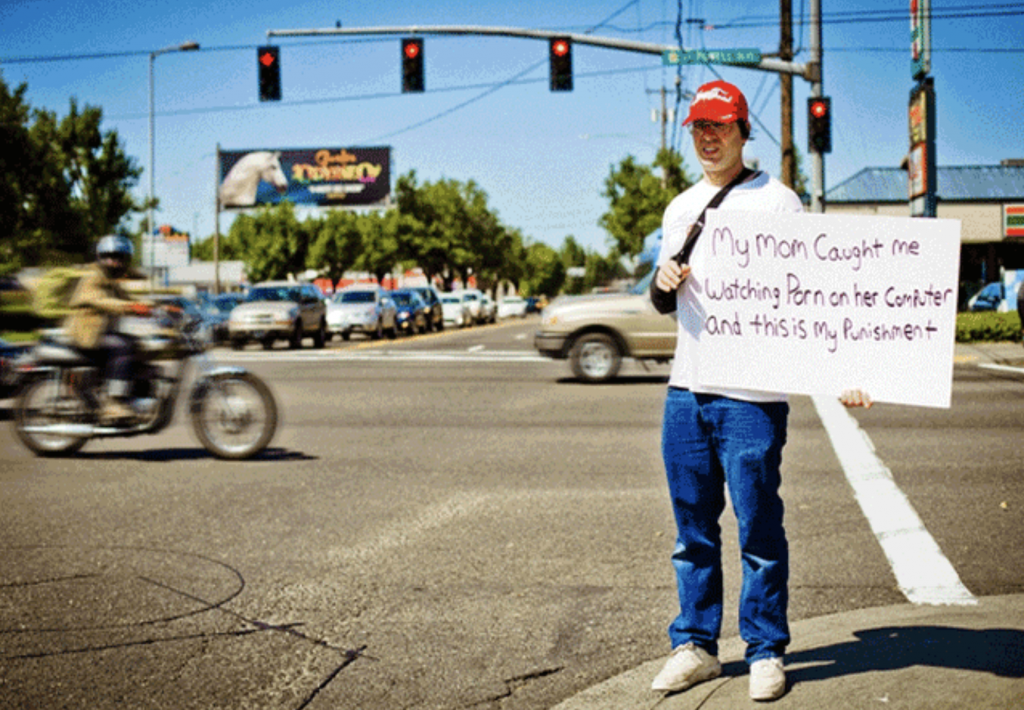 Save Portland From Hell – Interview with William Perk

Even if you’ve heard of the “Save Portland From Hell” guy, you perhaps have never met William, the man behind the pit-stained t-shirts and scrawled-signs. “Jake” first appeared in front of strip clubs and on street corners in 2014 as a mouth-breathing, mid-thirties virgin, and sidewalk evangelist. Like so many, I wasn’t convinced this was satire because it was so damn good.

Is he for real? Is it a joke? We’ve seen such men before, albeit more hostile than Jake. The religious fanatics who litter adult businesses with flyers proclaiming damnation or redemption, or stand screaming “faggots and heathens” at Gay Pride and Slutwalk DO exist, and William Perk was shining a spotlight on the absurdity of all of it.

Today, William is retiring Jake and explaining how the beloved Portland character came to be.

Just a guy trying to pay my phone bill.

How did you get here?

Through a stint at Bible school and drug rehab.

What are you doing?

Killing SPFH and moving on.

SPFH doesn’t work under a Trump presidency. If I had thought he was going to win, I wouldn’t have done any of that Trump shit. Stephen King said it first, “Trump is no longer a joke.” I just wished I had listened to him when he said it back in June.

Also, my main desire is to connect with people and communities and it felt like I was doing that early on. But towards the end it felt like maybe my efforts had the opposite effect. And if I’m not connecting with others and building up then what’s the point? Of course, I just switched my antipsychotic medication so that could have something to do with it too.

How was SPFH born?

I had just gotten out of rehab and my dad was organizing an event called the Jesus Experiment Crosswalk, where he and a bunch of church people were gonna carry huge wooden crosses through downtown Portland. I had just gotten off drugs and was like, “Dad, what the fuck are you gonna do? Alright cool, if you’re gonna do that then I’m gonna do this.” And so I dressed up as a black sheep and walked with them. They didn’t like it much. One church lady spoke tongues at me. I didn’t know what I was doing but it was my way of saying, “This is silly.” And then I kept seeing things that conservative evangelicals were doing that I thought was bullshit so I kept responding in the best way I knew how, a creative protest.

How did your parents feel about that?

I think they thought, “At least he’s not shooting up heroin.”

When I spoke with you last year you stated that you are a recovering addict.

Yes, I’ve been clean now for over three years. SPFH wouldn’t exist if I was still flicking needles and railing crushed Xanax.

You don’t sound so optimistic. Sup’ dude? And how old are you? When did you become addicted to opiates? I’ve struggled with alcohol, which is another type of challenge since it’s legal, and everywhere.

I’m thirty-seven and I started drinking when I was twelve/thirteen. I discovered opiates when I had my wisdom teeth removed at seventeen. That led to OC’s which led to heroin.

I drive for Lyft.

Where are you going?

What do you admire about Jake?

I admire Jake’s ability to see the good in people, the way he deflects insults and diffuses conflict.

What could Jake do to self-improve?

Drop acid, read Hitchens, and get a lap dance. In that order.

Has anybody recognized you? I met you as yourself at an event at the strip club before you got into costume as Jake, and I was confused by how normal and conventionally attractive you are. I had only ever seen Jake, and Jake doesn’t carry himself too well.

Thanks, but it often feels like acting normal is a performance. And I’ve had a few friends recognize me when I was out as Jake. But that was always fun. Fortunately, no one recognized me when I went door-to-door Christmas caroling by myself dressed as Jake. That would’ve been awkward.

Did Jake end up saving Portland from hell?

Jake made a few real friends and that’s more valuable than “saving” the whole goddamn city.

And you grew up here, yes? What are your thoughts on the rapid expansion?

Yes, I grew up here and graduated from PSU. It’s my hometown and I love it. I’ve lived a few other places but I always come back. And it’s definitely changed quite a bit which is cool, except for the housing crisis and traffic.

Satire seems to be confusing when the audience is so broad; plenty of liberal minded folks like myself got pretty pissed until they learned that you were performing. Did you ever receive support or encouragement from self-identified Christians, or from other religious zealots?

No one wants to deal with another religious asshole so it wouldn’t have worked if Jake had a mean bone in his body. He never threw insults or spewed hate. Still, a lot people had their guard up when they saw a guy wearing a Jesus Christ hat and an Abstinence t-shirt so it was crucial to let them know he was a kind harmless man that was just delusional. Unfortunately, that’s not the case with a lot of religious zealots like pastor Chuck O’Neal or Grant Chisholm. Grant once yelled at me for “mocking God” and pastor Chuck once chased me off while calling me a “false prophet.” So they’re definitely not fans.

But I did receive encouragement from some progressive Christians and a few conservative Christians, like my parents, lol.

Just how religious are your parents?

My dad was a preacher and he writes Christian books.

Do you think there is value to spirtuality or religion?

One time I took a bunch of Kratom and was baptized into the Orthodox Church. I was numbed out on Suboxone, was seeking meaning in my life and found it in religion. It was a nice community but I couldn’t take the Bible that serious. And they don’t fuck around. Eventually, I left Orthodoxy and found community with other artists.

So I think the value with religion is that it can provide community, which is important. However, a community full of people who take the Bible literally can be dangerous. Besides, community can be found in bingo halls to bath houses and who’s to say that’s not sacred?

So although there may be some value to religion, I think it’s unnecessary.

Have you ever read A Year of Living Biblically, in which the author follows the Old Testament verbatim for a year?

The book really illuminated how obsolete the Bible has become in literal practice: it says that you can’t have man on man sex, but it also states that it is equally sinful to wear clothing of mixed fibers. Which the majority of Americans do, every day. The clothing, not the gay sex, lolol.

Haha, no gay sex and no mixed fibers. Or like Deuteronomy 25:11-12 (NIV) that states, “If two men are fighting and the wife of one of them comes to rescue her husband from his assailant, and she reaches out and seizes him by his private parts, you shall cut off her hand. Show her no pity.” So much ridiculous shit in that goddamn book, can we please read it with some common sense. And I haven’t read, “A Year of Living Biblically”. I’ll have to check it out.

I spoke with you on my podcast a few months ago; you mentioned that being Jake served as a source of therapy for you; are you at a point where something else has become as fulfilling? Or?

I try to always be working on some creative project but I receive fulfillment when I give. With SPFH it felt like I made a bunch of fucked up little gifts and gave them to strangers. I got enjoyment when I saw someone’s face light up as they processed the flier I just handed them. So I’ll always give gifts they just won’t be wrapped in a SPFH logo.

Aha! Does this mean you’ll be confusing and delighting people around Portland for years to come?

It just means that I’ll always be creating and fucking shit up.

There are other people reading this who are struggling with their own substance abuse issues, or behavioral challenges. Can you tell me what has worked for you to stay healthy or happy(er)?

Aside from working, eating well, and exercising, which are all important to me, I’m happiest when I’m involved with a community and giving back, and taking Zoloft.

Have you ever been hospitalized due to your mental health? I’m bipolar 2, unmedicated, but it’s a lot better with regular sleep and vitamin D.

Back in 2011 I had my first psychotic manic episode where I was delusional and thought I was a saint. But I just burned all my shit in the fireplace and got my brain scanned at the ER. I’ve been medicated ever since and am fairly stable. Sometimes I’ll get manic and think I’m great but then I come back to reality and realize I am not great. And yeah, Vitamin D is important. When I’m down, sometimes I’ll hit up a red light therapy session.

Was there any rule on dating and sobriety? What program did you go through?

Back in October of 2013 I went through Serenity Lane Drug Rehab in Eugene. And they suggested we not date for the first year.

If you could have chosen to be born, would you?

I will miss “Jake” and his performance art. Silly stunts that lay bare the absurdities of religion are hard to come by. Unfortunately, not many people took the time to dissect the messages behind the antics. How silly and absurd it seems, to trade candy bars for saved souls, or to ship sex toys for prayers. And yet, houses of worship have used gimmicks and vouchers to attract worshipers (and their funds) for millennia.

What a horrific public display to publicly shame one’s child for a human activity that is quite normal, and yet there are plenty of Youtube videos that document parents publicly shaming their children. (Many of whom self-harm or even kill themselves in response).

What a pointless stunt to prop up Donald Trump as a crucifixion hero; the hate-mongering, racist and probable rapist that is our new POTUS is the furthest thing from a messiah. And yet you find plenty of purported Christians who do indeed worship the king of the comb-over.

It is an American privilege to protest. It is difficult to stray from the herd because none of us want to be crucified. William/Jake found his own way, and in the next four years we may need to become more creative in the ways we protest.

I will remember the stories of his adventures, for years to come. Like Jesus, he inspired and infuriated people. Bless you, William Perkins, for all of your good works.